The United States has expelled 35 Russian diplomats and closed two Russian compounds in a response that Barack Obama says was “necessary and appropriate” to “efforts to harm US interests.”

White House report said, “Russia’s cyber activities were intended to influence the election, erode faith in US democratic institutions, sow doubt about the integrity of our electoral process, and undermine confidence in the institutions of the US government.”

The move against the diplomats from the Russian embassy in Washington and consulate in San Francisco is part of a series of actions announced on Thursday to punish Russia for what the official said was a campaign of threatening American diplomats in Moscow and intervention in the United States election.

“The Federal Bureau of Investigation and Department of Homeland Security are releasing declassified technical data on Russian civilian and military intelligence service cyber activity,” Obama said in a statement. 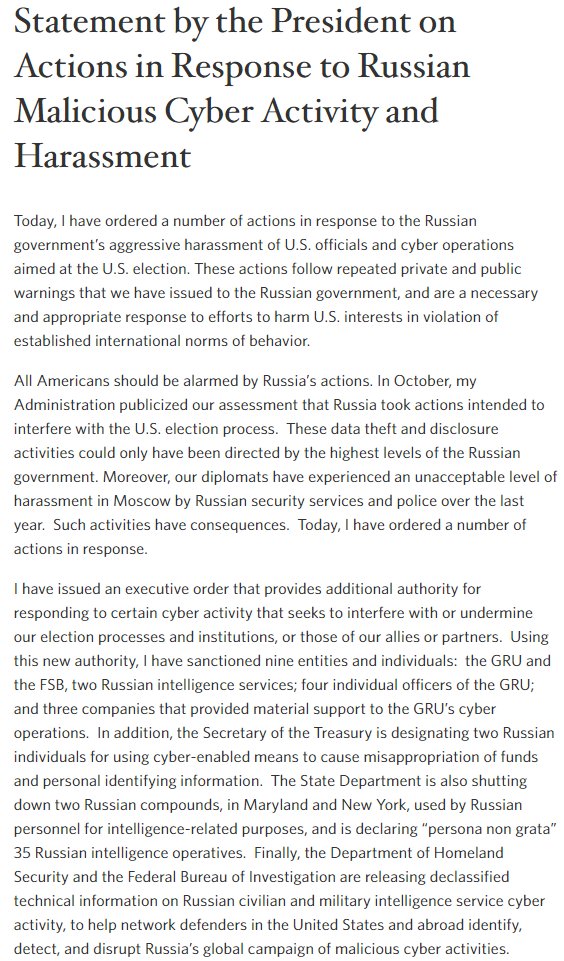 In a tweet on embassy’s UK Twitter account, posted a photo of a duckling with the word “Lame” over it, about Obama as he is approaching the end of his “lame duck” period in office after roughly eight years as a leader.

The timing took during the last days of President Barack Obama’s presidency, head to a new Post-Cold War low in U.S.-Russian ties, which have worsened over disagreements on Syria and Ukraine.